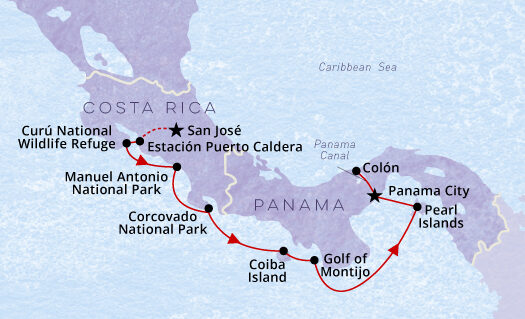 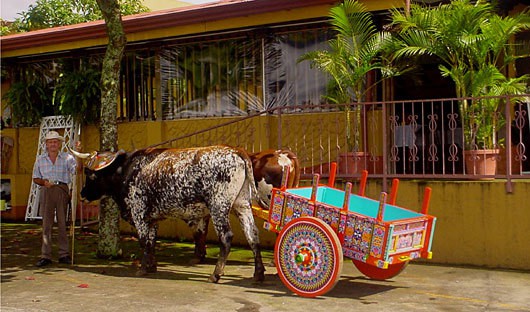 Today we meet at a central location in San Jose and will then transfer two hours west to Puerto Caldera. Here we will meet our vessel, RCGS Resolute, head aboard and settle into our rooms. Tonight we will enjoy dinner and then migrate to the deck, revelling in the first of many tropical sunsets. RCGS Resolute will make a short sail across the Gulf of Nicoya to anchor off the Nicoya Peninsula, ready for the next day’s adventures.

The RCGS Resolute (formerly the MS Hanseatic) is a modern and comfortable cruise ship with all en-suite cabins accommodating up to 146 guests. Purpose built for expedition cruising in Rauma Finland the Resolute not only has unmatched stability and superior speed to get you to your destination and out exploring. 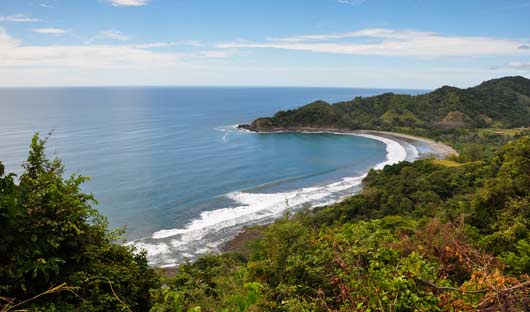 Today we will explore the Curu National Wildlife Refuge which is nestled at the southeast tip of the Nicoya Peninsula. The refuge hosts one of the most beautiful beaches on the peninsula and has spearheaded many successful sustainable development programs from reintroducing the near extinct spider monkey, to the coral reef restoration project and migratory bird monitoring. This is an ideal location for kayaking, paddle boarding and snorkelling. 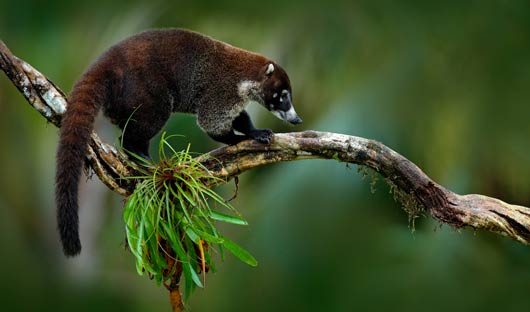 Our adventure continues in the Manuel Antonio National Park. Boasting over 100 species of mammals, 184 species of birds and a plethora of diverse flora, this park is a wildlife lover’s dream. The network of hiking trails criss-crosses the parkland, providing access to its rainforest, white sand beaches, waterfalls and coral reefs. If you’d rather explore the park by water, you can use a paddleboard or kayak for an aquatic adventure, or simply relax on one of the white sand beaches. 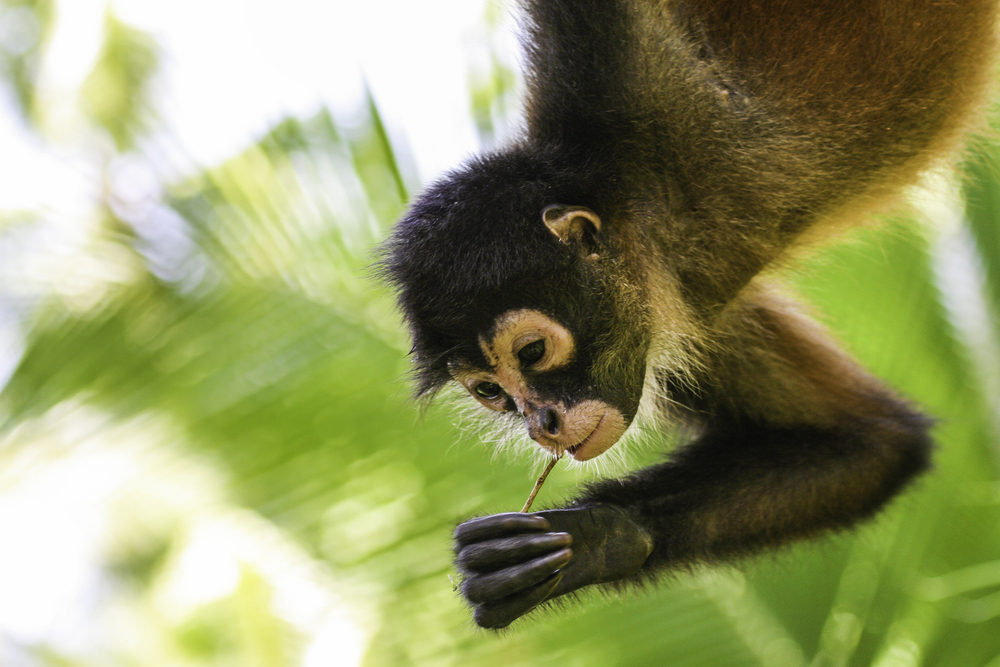 Extending into the sea at the southern end of Costa Rica’s Pacific coast, the Osa Peninsula is rich with both wildlife and history. On the first of our two days in one of the country’s most remote destinations, we will once again take advantage of our coastal access to explore the Parque Nacional Corcovado. The park is home to Costa Rica’s largest population of jaguars and tapirs; the only remaining old growth wet forests on the Pacific coast of Central America, all four of the country’s monkey species and more. 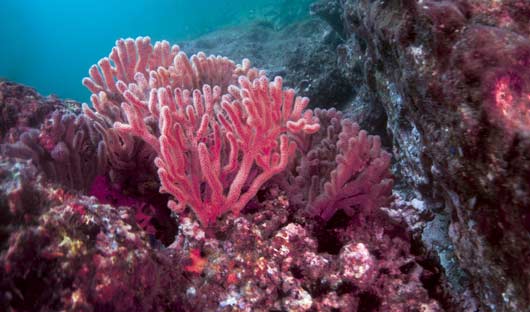 On the second day on the Osa Peninsula, we will round its most southern point, while navigating the emerald waters of the Golfo Dulce or “Sweet Gulf”. You will have two ways to explore the Golfo Dulce, either by land or sea with kayaks or paddle-boards through the expansive tangled mangroves. 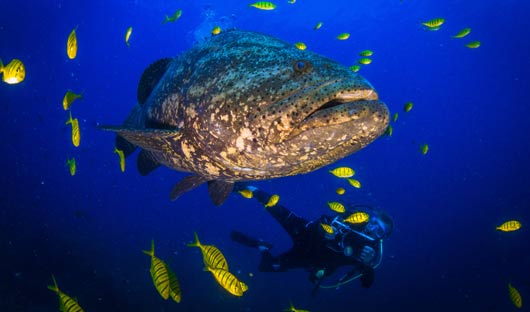 As we bid farewell to Costa Rica, our first stop in Panama is Coiba Island, a place of unusual history. Having separated from the mainland an estimated 15,000 years ago, Coiba is now home to many endemic subspecies and was declared a UNESCO World Heritage Site. The park is also home to numerous native flora that have since become extinct on the mainland of Panama due to deforestation. This is also one of the last places in Central America where the scarlet macaw can still be found in bountiful numbers. Once again, we will have the opportunity to venture out on foot, kayak, or paddleboard to explore this tropical gem. If time permits, we may have the opportunity to sail to near-by Granito De Oro, which is a top diving and snorkelling site due to the diversity and volume of marine life. In the afternoon we will head over to the famous wetlands of the Golfo de Montijo, whose 50,000 acres of mangroves are home to innumerable creatures. 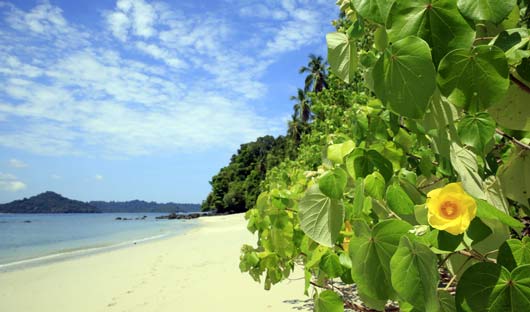 We have now entered the Gulf of Panama, but before we head for the Panamanian mainland, we will make one more island-hopping stop at the Pearl Islands, or as locals refer to it, Islas de las Perlas. The islands are most famous for their deserted white sand beaches, fragile ecosystems and marine life. 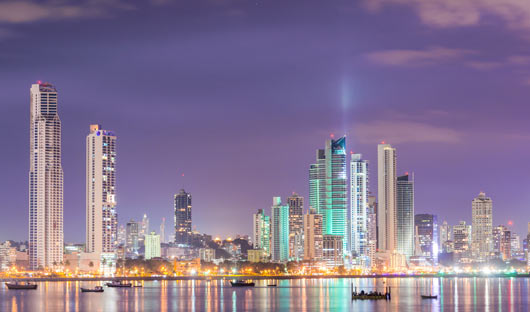 Steeped in rich Spanish history, Panama City’s cobble stoned historic centre, Casco Viejo, is framed by colonial-era landmarks such as the Presidential Palace and Metropolitan Cathedral. Use the day to enjoy an espresso or mojito in one of the many cafés shaded by bougainvillea in Panama’s old quarter, visit the numerous museums, including the Museum of Biodiversity, designed by Frank Gehry, or discover the colourful markets. 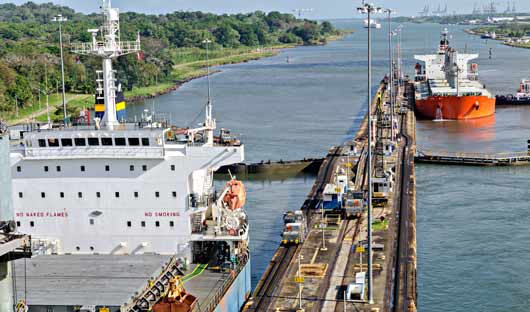 Today we will be moving through the 77km Panama Canal from the Pacific Ocean to the Caribbean Sea. We will pass under the Bridge of the Americas before entering the Miraflores Locks. The locks will then take us up to Miraflores Lake, then up again to Gatun Lake, before being lowered back down to the sea level of the Caribbean Sea. You will not simply watch this incredible feat of engineering, you will have the opportunity to experience it firsthand. 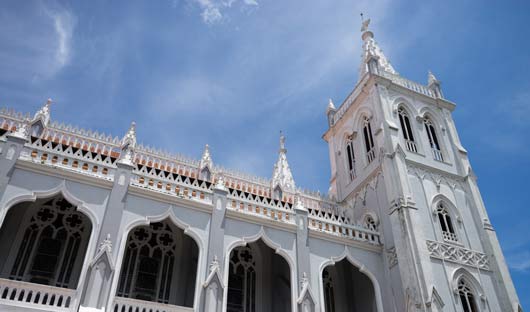 After breakfast, it is time to bid farewell to your crew and fellow travellers as we disembark RCGS Resolute. A transfer back to Panama City is provided for all guests and while some of us will travel to the airport, many may wish to add a few extra days to explore more of the masterpiece that is Panama City.