No matter where you are in the world a meal made from home grown produce, prepared by an experienced cook to traditional recipes, eaten in a typical restaurant and accompanied by a local wine is a lovely way to immerse yourself in a culture.

However, why not go one step further and learn how to cook the food by taking a private cooking class like the one offered by Gonzales, Master Chef at the Runca Hotel in Lima, Peru. It’ll be a gastronomic experience you won’t forget in a hurry!

Out of the six of us – two Chileans, two Argentinians and two Aussies, only the three females were really excited by the prospect. The males had just come along to keep the peace. The venue wasn’t your typical stainless steel kitchen, with hanging utensils and cooking implements in arms reach. Our classroom was the intimate, rooftop restaurant of a boutique hotel with views towards the Lima coastline.

We were greeted warmly by Gonzales in perfect English, with a slight American accent, a legacy of seven years working as a chef in the United States. The fact that half of us spoke no Spanish and the other half no English didn’t faze Gonzales at all! No matter which language he was speaking, his very informative patter was made all the more entertaining by his wonderful sense of humour and passionate body language. 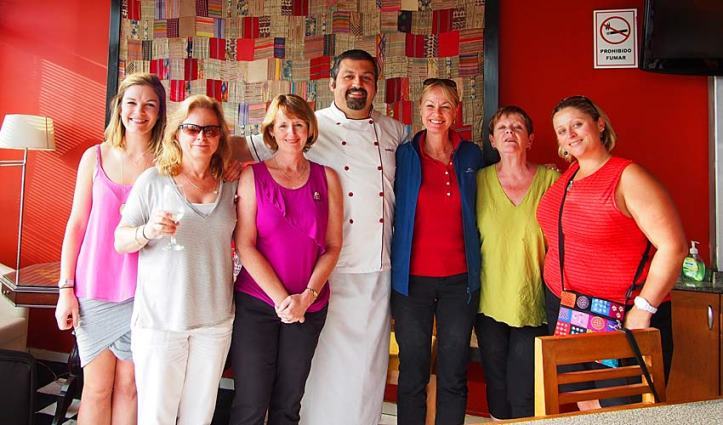 For starters, we learnt about the history of Pisco Sour, a traditional South American cocktail, composed of Pisco liquor, lemon or lime juice, sugar syrup, egg white, ice and Angostina Bitters. If the drink didn’t impress, the bottle certainly did – a heavy, square shaped container with a colourful, three dimensional picture magnified through the clear liquid. After tasting three very different varieties of Pisco Sour – neat, things were really heating up! The following demonstration of how to make one was more about estimating and tasting than following any specific measured recipe!

Things became hands-on as we were instructed how to chop the ingredients for ceviche, comprising raw fish marinated in lime, onion, garlic paste, salt and a special sauce. Sounded unusual but tasted amazing! Next on the menu was a layered dish of potato mixed with lemon, salt, mayonnaise and pimento sauce, containing chopped avocado and olives, topped with grated hardboiled egg, diced tomato, slivered onion and a deep fried, quinoa crumbed shrimp. Delicious! 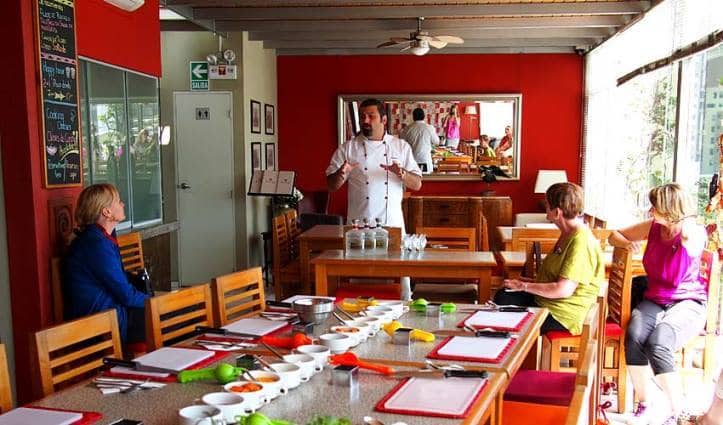 Moving into the tiny, cramped kitchen, we watched as Gonzales almost set the place alight, flambe-ing and frying Lomo Saltado, a traditional Peruvian dish of sauted potatoes, tender beef, onions, tomato, vinegar and soy sauce. Very tasty! Each course was accompanied with plenty of wine. We finished with Dulche de Leche, a delectable South American dessert made with boiled condensed milk and flavoured with a Peruvian fruit. Not one for the diet conscious!

Three of us begun the day feeling unenthusiastic about the cooking class but all six agreed the hands-on preparation was almost as much fun as the actual eating and it had been a highlight of our trip. Two very full Aussies politely declined the offer of a ride to their hotel, preferring to walk back via the beach. 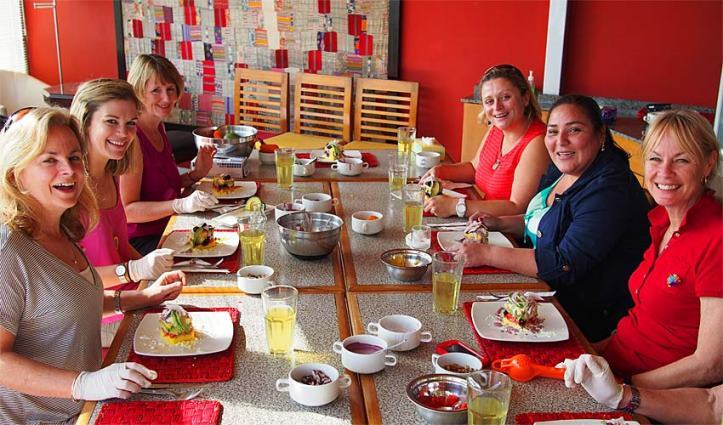