Posted at 10:53h in editorial, Uncategorized by Mikaela Price
Share 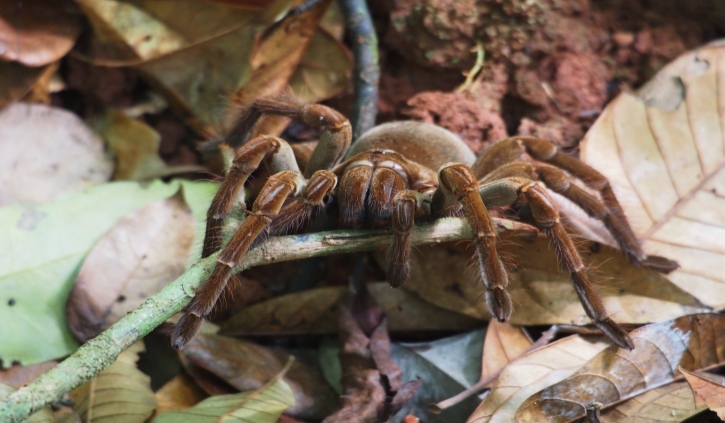 A photographer and entomologist from Harvard University’s Museum of Comparative Zoology on a night-time stroll in a rainforest in Guyana found that he had some creeping company – nothing less than the world’s heaviest spider!

Piotr Naskrecki said he heard a rustling sound coming from the forest floor, and when turning on his flashlight found himself sharing his night-time walk with a South American Goliath Birdeater (Theraphosa blondi). A spider whose legs can span 30 centimetres, each attached to a body Naskrecki described as the size of a “large fist.”

They can weigh as much as 170 grams, as heavy as a small puppy, he says. No silent stalker, the feet of Theraphosa blondi “have hardened tips and claws that produce a very distinct, clicking sound, not unlike that of a horse’s hooves hitting the ground,” he wrote on his blog. Because of its size, he continued, the Goliath Birdeater is likely to be the only spider in the world that can be heard as it walks. Despite its name, he explained that birds are not a normal meal for the birdeater which prefers whatever it can find on the forest floor, including insects, earthworms and frogs.

Still, if it did happen upon a fallen nest on the forest floor it could kill any birds found inside, and is capable of killing a small mammal, injecting venom through fangs that can reach from 2 to almost 4 centimetres long.

If you would like to visit Guyana on your next holiday please contact our friendly travel consultants on 1300 784 794 or contact@southamericatravelcentre.com.au

Subscribe to our email newsletter to hear about our latest news, new experiences and all things Latin America, Antarctica and the High Arctic.