22 Jan The Hidden Surprises of the Guianas

The Hidden Surprises of the Guianas

When I told my friends and family that I was taking a trip to Guyana and Suriname, I received a mixture of reactions, but the main one was “You work in South American travel, why are you going to Africa?”. I couldn’t blame them, these two little countries, along with French Guiana, are tucked away into the north eastern corner of the South American continent, sandwiched between the larger, better known Brazil and the smaller, more volatile Venezuela. 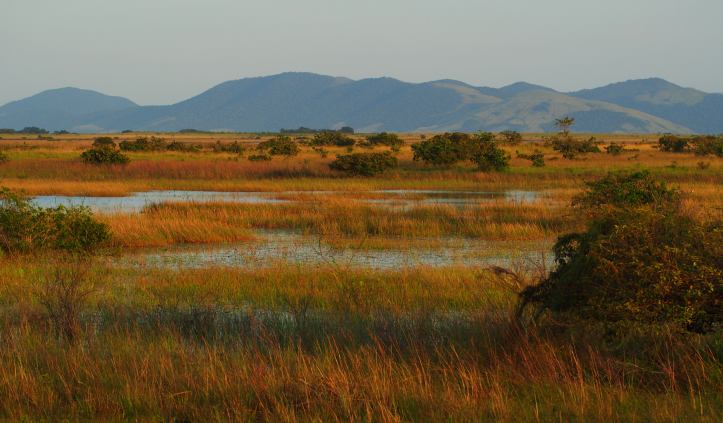 The countries of Suriname (formerly Dutch Guyana), Guyana (formerly English Guyana) and French Guiana are collectively known as the Guianas.  Whilst small and sharing borders with one another, they have some very profound differences. One of the most obvious is the languages spoken.  French Guiana, not surprisingly, speaks French, Suriname is Dutch speaking, and Guyana is an absolute pleasure and ease to travel for those of us native English speakers because the official language is English, enhancing the ability to interact with its incredibly friendly locals. 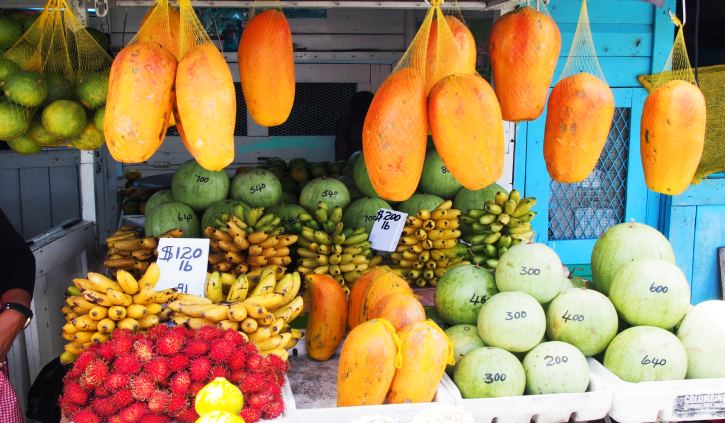 However it was one of Guyana’s other ‘greats’, neither feathered, finned or with fur, which was undoubtedly the highlight of my incredible trip. Kaieteur Falls are the world’s longest, single drop waterfall in the world. Next door’s Venezuela is home to the more famous Angel Falls, the highest waterfall, but this has several steps. Kaieteur Falls drops a dramatic 226 meters without the water being broken, and given its vast width and the amount of water pouring over every second, its immense power is absolutely jaw dropping. 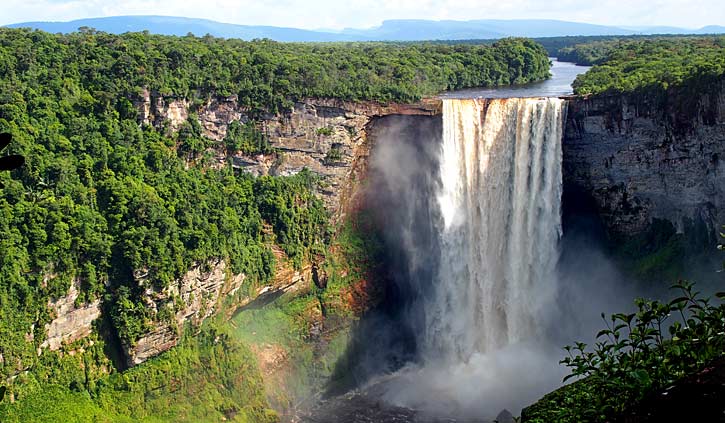 I’ve seen several impressive waterfalls before, but what really sets Kaieteur Falls apart is the fact that when you visit, you’ll have the falls almost entirely to yourself and I don’t know of many natural wonders on this scale where you have that privilege. Guyana gets very, very few tourists, and those who do venture to this remote corner of the world have to then take a charter flight in an 8 seater Cessna to get to Kaieteur Falls, so it isn’t exactly the most accessible tourist attraction. But those who do make the effort will be thoroughly rewarded. 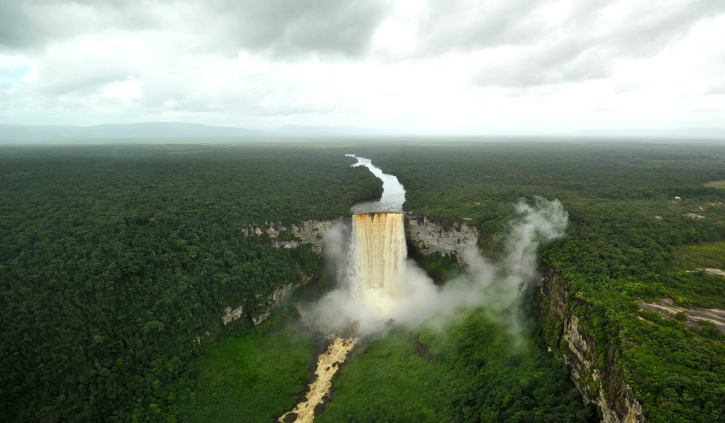 Kaieteur Falls has several viewing points (which are nothing more than a short stroll from the airstrip) which give breath taking views of the falls and also the canyon into which they plummet.  Because of the permanent cloud of spray at the base of the falls, scientists believe there’s an entire ecosystem – totally unexplored – which is filled with undiscovered species.  From the further viewing points you can enjoy an overall panoramic vista with each view point getting you closer to the falls, the enormity of this phenomenon becomes more and more obvious – the deafening thundering reverberates in your chest and the spray reaches you, even 266 meters above.  The final view point is literally on the edge of the falls – there are no rails or safety barriers which is again unlike any other natural wonder of this grandeur. 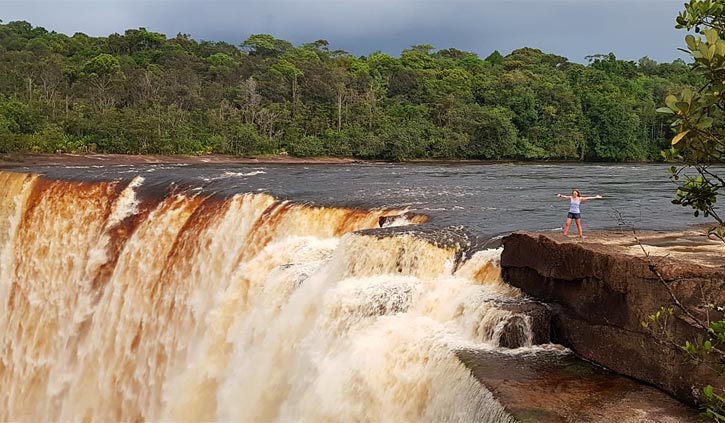 For those who opt to stay the night at Kaieteur Falls, a very basic school camp style lodge, located just a 2 minute walk from the falls, will provide you beds or hammocks, bathrooms and a kitchen for the night and the chance to see the falls as the sun sets and rises again the next day.  At dusk literally millions of swifts fly from the interior of the jungle and form a thick, neatly formed bird highway – creating a lightning fast black blur which zooms past you in the sky.  They dive over the edge of the falls and find their nests behind the thundering cascade of water.  Roughing it for a night in less than glamorous conditions is 100% worth it for this dizzying spectacle alone.

But just when you think Kaieteur Falls can’t impress any further, following a coffee on the edge of the falls at sunrise, we set off from the lodge in search of the endemic Guyanese Cock of the Rock and the Golden Frog. The Golden frog is a tiny, almost see through frog the size of your thumbnail and found only on the Kaieteur Plateau. What makes this little guy so fascinating is that he lives his entire life in the pools of water created in the inside of a Tank Bromeliad. Standing on your tiptoes and peering into these giant, prehistoric plants searching for the brilliant golden frogs becomes a game, and finding one is incredibly exciting. They’re quick though – having your camera ready and focused is key as they’ll jump into the water and out of sight in the blink of an eye! 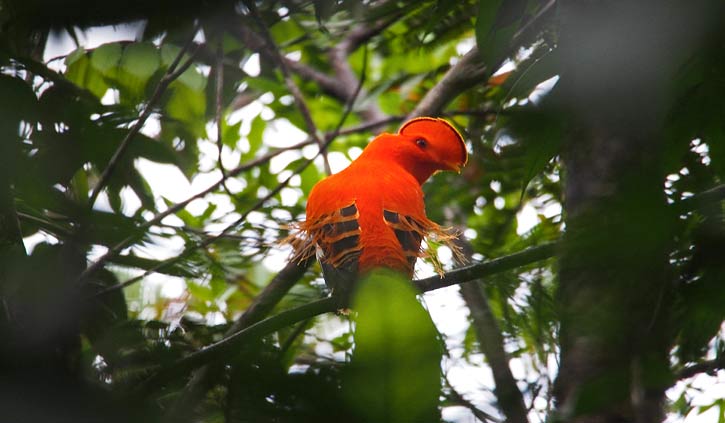 After enjoying our game of frog hunting, we took off in search of the Guyanese Cock of the Rock.  I was incredibly excited to see this bird – a brilliant traffic light orange colour and with an impressive disk like crest of feathers on their head.  Luckily, our guide knew exactly where their lek was located, so seeing these guys is basically guaranteed.  A lek is almost like the birds equivalent of a local park or the corner pub – it’s where the males dance for and aim to impress the females and even when there are no females around, they still come together here to socialise.  Their orange colour – contrasting with the green of the trees – is a fantastic site. 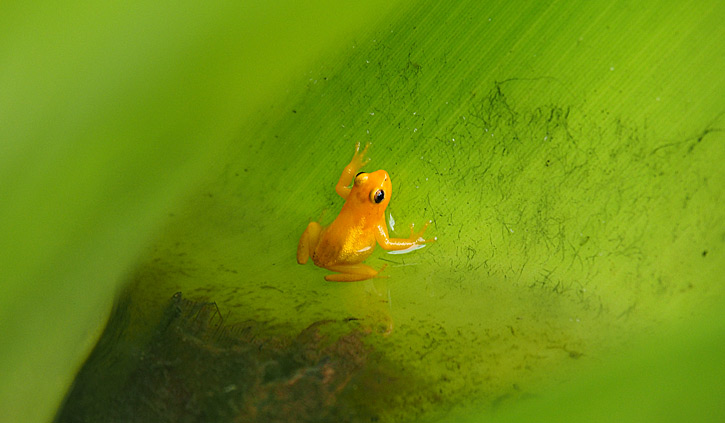 Kaieteur Falls packs a lot into a small area. I expected an overnight trip to be exciting, but the added bonus of seeing the swifts zooming into the falls, the golden frog hiding in the giant tank bromeliads and the Cock of the Rock’s dancing – all in the space of 12 hours – completely blew me away. It’s hard not to consider this one of my top 10 travel moments, and reason enough for anyone to consider a trip to the Guianas. 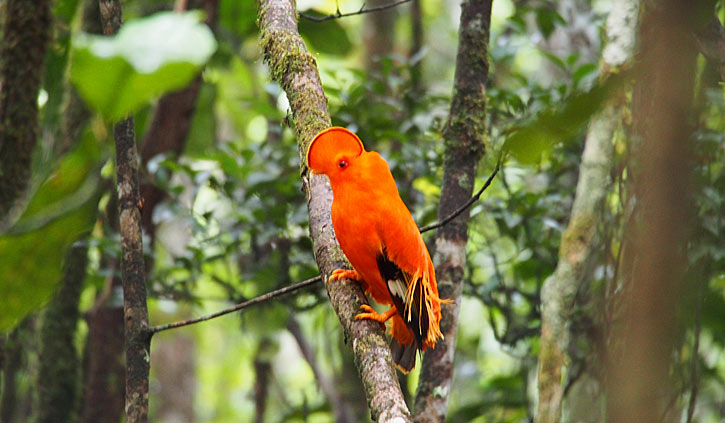 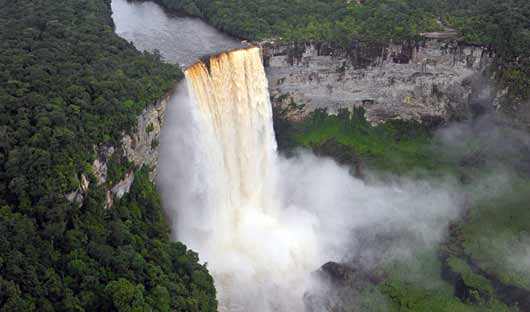 Highlights of Suriname and Guyana 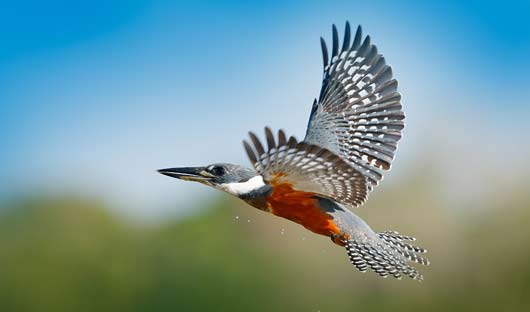 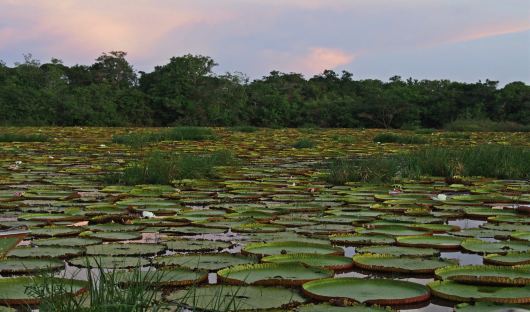