Brazil’s best wildlife is found in the Pantanal region, a huge wetland area that is best visited between late June and September (the local dry-season). The dry forests found on the edge of the Pantanal afford additional wildlife viewing opportunities. The following is just a suggestion, we will create a customised Brazil itinerary just for you. 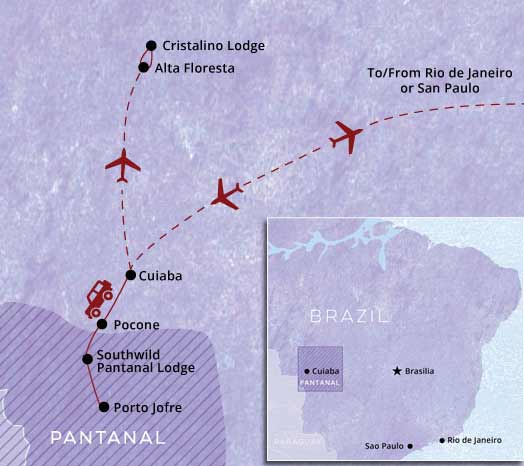 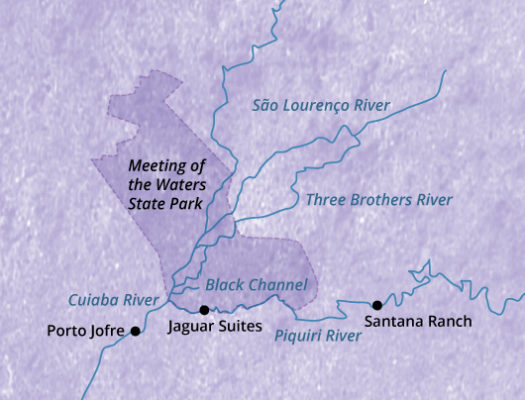 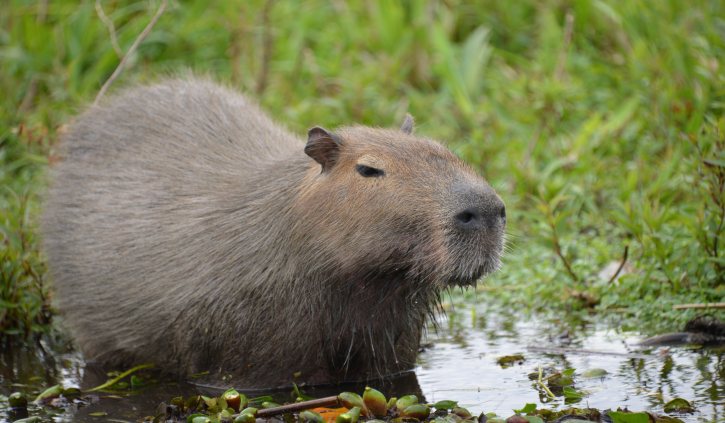 You will be met at the airport by your guide for the transfer.  After lunch in local restaurant your drive from Cuiabá starts with 100 km on asphalt (approximately 75 minutes) to the town of Poconé. These 100 km run through different types of tropical dry forest that go by the name of “cerrado” and “cerradão”. As you leave the south end of Poconé on your way into the Pantanal proper, you’ll notice the dry forests and fields drop-down into the large flat floodplain of the Pantanal proper.  There are 122 bridges found along the well-known 145-km-long “Transpantaneira” raised dirt and gravel road. After 17 km you will encounter your first wooden bridges, often seeing herons, caimans, and Capybaras.  The lodge is famous for its excellent mammal viewing, photographic opportunities from the two wildlife-viewing towers, water birds on the Pixaim River, and birding. Slow drives on the lodge’s private, 3-km-long entrance road often yield good views of species such as Marsh Deer and the 600-pound Brazilian Tapir (the largest land animal of South America). 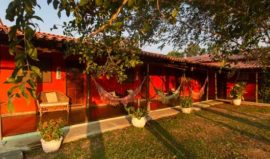 Activities at the lodge are organized according to the current weather, logistics and your interests. One forest walk and one boat (and some days two), vehicle or horse outing per day are included.  During your stay you should see hundreds of bird species (over 650 resident species and close to 1,000 including migrants), including Jabiru, Giant Otter, Capuchin monkeys, caiman and capybara to name the more common species.

You have a choice of activities, all are optional, several are a short-walk from the Lodge.

1) Boat ride: 2 hours morning or afternoon boat tour of the Rio Pixaim.  This is probably the best way to discover this area of the Pantanal, you’ll see hundreds of species of birds and it is also one of the best sites for predictable viewing wild Giant Otters from a distance of only 1 to 5 metres away.

2) On most nights (7.00 pm to 9 pm) one or more habituated, wild Ocelots are visible from only 7-10 metres in good electric light (suitable for photography during).  The cats appear at a forest location that is a 500-metre walk from SouthWild Pantanal Lodge.

3) A new TAPIR attraction is now operational at SouthWild Pantanal.   A female Brazilian Tapir (at 250 kilos, the largest land animal in South America) is regularly appearing at a location 650 metres from the lodge; to forage for some fruit that we put out for them that allows for very natural photos in natural wild habitat.  This Tapir Experience is the culmination of 22 years of testing and tweaking of Tapir viewing methods and systems that SouthWild scientists have directed in three different countries.

Other options include
4) Forest walk  :  1-2 hour morning or afternoon walk in the forest and savannas not far from the lodge.  Optional visit to the forest tower. Capuchin Monkeys are often seen in the forest.

5) Horse riding: 2 hour horse ride through the ranch. This offers a great opportunity to see the Pantanal from a more intimate perspective.

7) SouthWild Pantanal offers the free access to the Jabiru tower close to the lodge.  It offers excellent photographic of these beautiful storks.

During the hottest time of the day you can enjoy a dip in the pool or the browse through the significant number of nature books in the library. 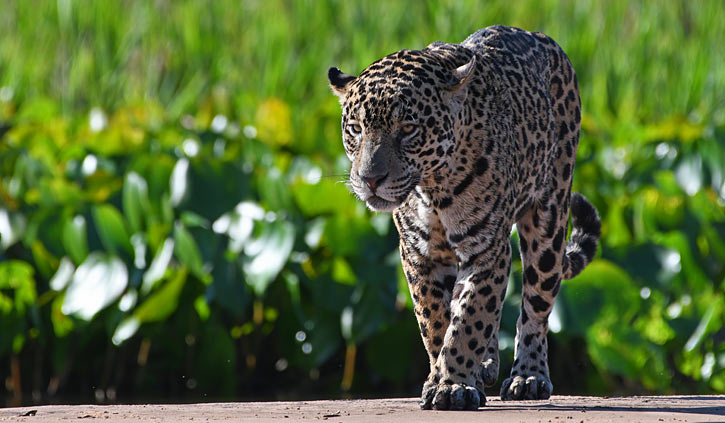 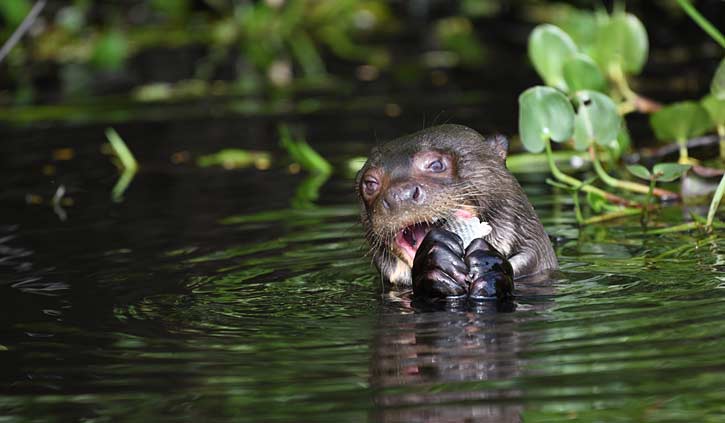 After breakfast you depart to drive 82 km to the end of the Transpantaneira Road at Porto Jofre. The type of vehicle used will depend on the logistical options and the weather; normally a (open topped) safari trucks: which is ideal for viewing the wildlife found along the edge of the road.

You’ll make frequent stops on the Transpantaneira in order to enjoy views of wildlife (Caiman, storks, herons, kingfishers and very occasionally anaconda).  The drive time varies according to what you see and the road condition (approx 3 hours). In Porto Jofre you board a Jaguar search boats to navigate the 17 km on the 100-200 metre wide Cuiaba River and then 12 km on the Piquiri River to Jaguar Flotel/Jaguar Suites . Upon arrival you’ll be welcomed and after checking in lunch will be served followed and then at 2.00 pm, you can take your first 4 hour boat outing on rivers of ‘Jaguarland’; an area that is home to at 65+ Jaguars that have become habituated to the approach of motorboats and people in them. Return to Jaguar Suites for dinner and a presentation about wildlife found in the area.

The next two days will follow the same routine, up early for breakfast at 6am (and there’s no value in going out too early as either it will be too dark or the Jaguars will not have started moving) to depart at 6.30-7am for a four-hour-long boat outing.  You’ll be back to the Jaguar Suite at about 11am in time for a nap and then lunch to head back into the boats at 2pm for further exploration of the Three Brothers, Black Channel, Cuiabá and Piquiri rivers in search for Jaguars, Giant Otters and profusion of bird life found along the banks of the rivers. You’ll cruise slowly at less than 25km to maximise opportunities to spot, stop, photograph and watch the wildlife.

Your guide and boat driver both have remarkable ability to spot the wildlife and with a little luck Jaguars.  On a recent trip into the region one of our team saw 7 different Jaguars, with 15 different sightings (each Jaguar has a unique pattern on it’s face and guides will identify those you see.  If you are fortunate to spot a yet to be identified Jaguar you get to name it (Mick & Bianca are both taken). 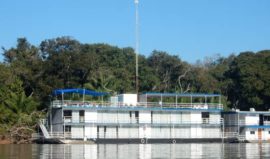 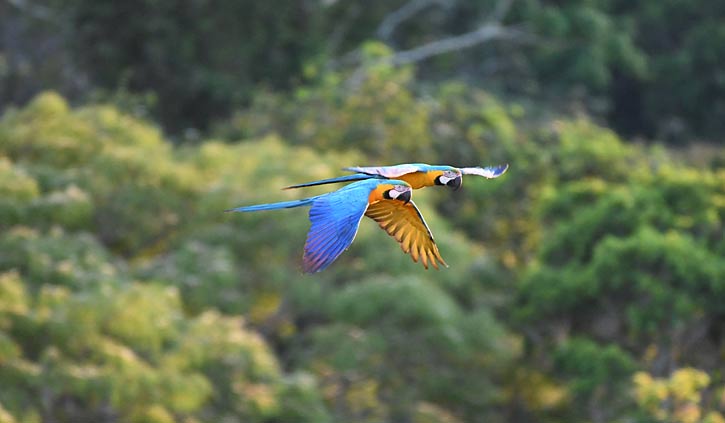 Early breakfast and check-out from Jaguar Suites you’ll take another shorter boat trip in the surrounding area.  At 8.30am boat transfer the 16 km downstream to Porto Jofre and then by road transfer to SouthWild Pantanal in time for lunch.  You’ll have time in the afternoon for another excursion and the option of a one-hour spotlighting truck safari, or maybe re-visit the  Ocelot viewing hide or the Tapir Experience, both of which are described above.

After breakfast at the lodge, check-out, and depart at 7.00-7:15 am to drive in closed, air-conditioned vehicle for 66 km of dirt road and then 105 km of asphalt road back to Cuiabá.  The drive takes 3-4 hours, and the service ends as our guide helps you check in at the airport for your onward flight. 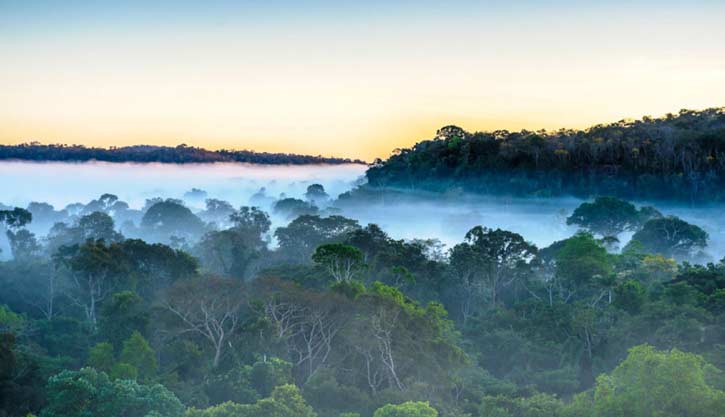 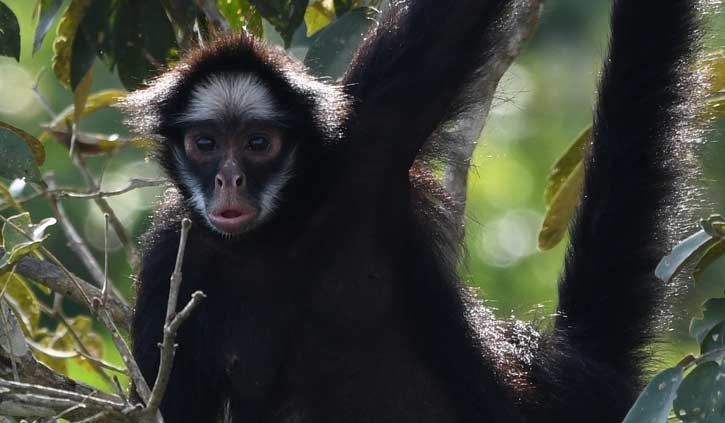 A short flight from Cuiaba to Alta Floresta will take you from the Pantanal to a dry-forest (as opposed to Rainforest).

Cristalino Lodge is situated in the Cristalino Private Natural Heritage Reserve and is covered by primary and lush rainforests and provides a variety of natural habitats. There are trails of different kinds, taking you through forests and hills, plus canoeing and climbing the Observation Towers, during which you can look at the plants, birds and monkeys. The activities usually begin early in the morning, particularly if you are to watch the sunrise from the top of an Observation Tower.

586 species of birds have been recorded in the area; including scarlet, blue-and-yellow, chestnut-fronted, red-and-green, blue-winged and red-bellied macaws.  If you are interested in Forest wildlife – Cristalino is a must.

There are many species of mammal in the reserve including Brazilian tapir, white lipped and collared peccary  and capybara.  The tapir and capybara are attracted to water and are most commonly seen along the river banks in the period from July to October.  Other mammals include the giant river otter and neotropical otter, which are excellent swimmers and hunters of fish.

The forest is also inhabited by many species of monkeys, such as the endemic white-whiskered spider monkey, feline night monkey, capuchins, red-handed howler, red-nosed saki, the rare snethlage’s marmoset and orabassu titi monkey. Of these, the capuchins, spider monkeys, sakis and howlers are commonly sighted.

It is important to note that viewing animals in the Amazon is a challenging task, because of the forest environment. Many birds and animals can only be seen with the help of the telescope that the guides carry with them. Nevertheless, the Cristalino region is one of the richest when compared to other parts of the Amazon due to the considerable variety of types of vegetation and terrain, thus making it common to see several different species on a single trip. It is also important that guests are prepared for the climate, which is hot and humid throughout most of the year.

A four night stay, offering 3 full days, is the optimum period to stay at Cristalino.  The lodge is very comfortable; the restaurant has stunning forest views.  The self-service buffet style meals are an especially enjoyable feature of the Cristalino Lodge experience. The kitchen gives preference to local products that are in season. So you can look forward to delicious Brazilian cuisine accompanied by stunning views of the forest. Organically grown fruits and vegetables, fresh fish and a variety of meats can be enjoyed under indirect lighting and by candlelight in an unforgettable atmosphere.

There are a variety of rooms offering comfortable beds, bathroom with a shower, ceiling fan, WiFi internet, armchairs, an additional outside shower in a private garden, and a veranda with a hammock. 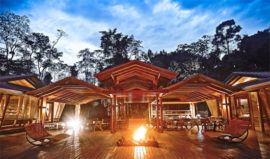 The Cristalino Lodge blends perfectly in with its surrounds beside the River Cristalino, within a private forest reserve in the southern part of the Brazilian Amazon region. The jungle is your backyard and the experienced staff at the lodge help you to explore it endlessly. Relax in your room with a cosy bed, refreshing baths, a soothing hammock and every convenience close at hand. In the bar, there is an inviting log fire that burns next to the river. The deck provides a view of the night sky full of stars, whilst the restaurant compliments the beautiful surrounds by serving delicious candlelight dinners. The Cristalino Lodge is commited to the environment and responsible travel by giving back to the local community and contributing strongly to sustainability.